Enjoyed riding through St. Louis this morning. Plenty of back streets to use and traffic not too bad. Got downtown and stopped by the St. Louis Dispatch. All the beat reporters were out on assignment, so pedaled over to the local NBC News affiliate to try my luck there. One security guard wouldn’t let my trike onto the terrace and another practically kicked me out of the lobby (he said network staff would never talk to someone off the street). Went outside and called the news desk upstairs, then spent the better part of the next hour filming a piece for the network. Don’t listen to people who tell you what can’t be done.

Pedaled down to the gateway arch, which was a thrill. Was welcomed there in style by the lovely Rachel Drochter and Angelina Giannas, who were waiting on a wedding party.

Also want to thank Debbie & Steve for the pics. 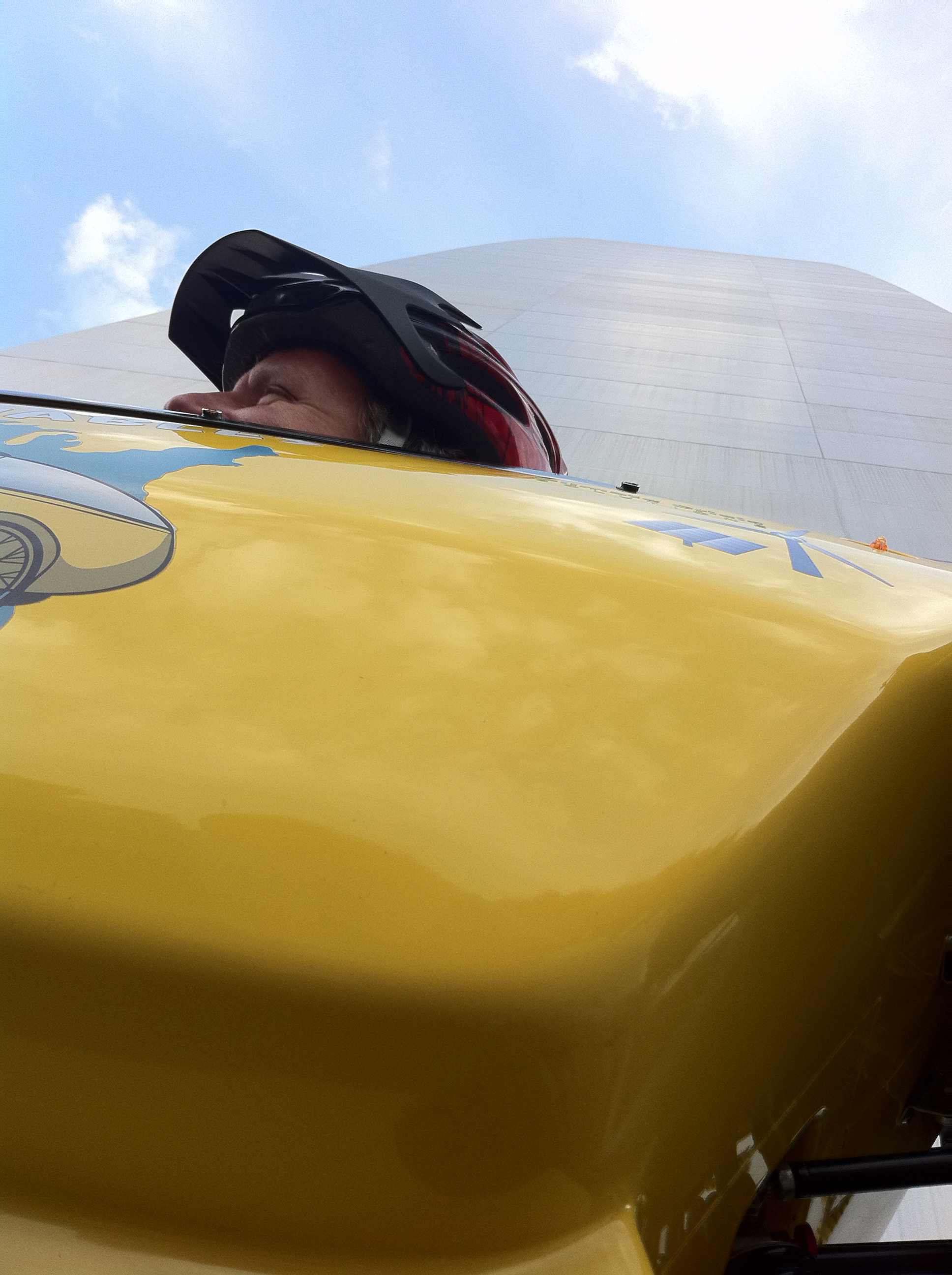 Then took the trike under the arch for the ceremonial passage to the east, but had to “Fred Flintsone” my way across, as the chain had come off.

Later found my way to the bike the path, saw a beautiful three-dimensional mural that I had to film, backed my trike off the path to get a better angle and the chain made a loud pop and broke.

As I got out to survey the damage, a guy camping nearby casually walked up to me to ask if I needed some help. That guy is Tom Reese, who is riding (mopeding, actually) with his dog, Daisy, from Spokane, WA and has been in St. Louis for about a week. Tom had not only special tools on his trailer to repair the chain, but spare chain links as well (and used to work at a bike store). About 30 minutes later, I’m back on the path heading north, but not before getting a personal tour of the wall mural from Tom. Thank you so much, friend.

Tom had mentioned a homeless “tent city” right up the path, so when I got there, I pulled in to check it out. A couple of guys walked up to me to check out the trike and told me I was at “Hope City.” What a great name, given the challenges they’re facing. In the fading light, I met “DJ,” who made a powerful appeal for jobs in America to help people get back on their feet. Is it just me, or are others just as outraged to have homeless people living in tent cities in America with no jobs, while wealthy special interests block a green industrial revolution and all the jobs it will create?

By then, it was starting to get dark, so I pulled off the trail into a grove of trees, on the banks of the Mississippi River. Was too tired to unpack everything and put up the tent, so just tossed my bag on the ground. Mistake, as awoke a few hours later to sprinkles. Got up and was preparing to ride in the rain, but it stopped, so grabbed a couple more hours’ sleep. Thanks to fellow biker Curt Gilker for the bike-friendly directions through St. Louis, through which I pedaled a total of 26 miles today.