Day 7: Spent most of the day inviting petition endorsers to our Nov. 7 White House action, but got down to the conference in time to hear the two-hour show on Keystone XL. Listened to some very powerful words spoken by some powerful speakers, but in two hours of talks, heard only one significant mention of Keystone XL’s southern leg, the section that is being built right now. To his credit, Bill McKibben publicly acknowledged that the southern half of the pipeline is being built despite the brave efforts of Tar Sands Blockade and others, saying “we have to keep fighting that section, too, as best ever we can,” but then it was back to talking about the 2014 northern leg permit decision. If Keystone XL is truly “the iconic environmental fight of our time, and when you’re in that kind of fight, you need to win them,” why isn’t the focus on winning the fight in Texas and Oklahoma? The Big Greens have clearly given up on the southern leg and are moving on.

How sad, and what a missed opportunity to rally thousands of young activists to take a bold stand against KXL’s southern leg, before it is too late and the Keystone tar sands spigot is turned on. Many of the activists I spoke with one-on-one at the conference were alarmed to learn that if not stopped, the pipeline’s southern leg is slated to begin transporting more than half a million barrels of toxic tar sands daily to Gulf Coast refineries by the end of this year. We will keep pounding the drum.

Shared notes afterwards with my buddy John Friedrich, and got caught up on each other’s lives, before getting a lift back to my friend David’s place for some more great home-cooked grub.

Day 8: After packing up in the morning, David dropped me off at convention center and I retrieved the trike from where I had stored it the last three days, before rolling down to the river for the Power Shift march through the city. It was an energizing and raucous march. Here’s a video I took that captured the spirit of the moment: “Rolling with Power Shift March in Pittsburgh” (note the smiling police officer behind the barricade who gave me a fist bump as I rolled by). The march received an enthusiastic response from office workers seen clapping and cheering from office buildings overlooking the march route. Later tracked down a splinter group in the courtyard of the County Courthouse, where about 30 activists organized a sit-in at County Executive Rich Fitzgerald’s office to protest plans to allow natural gas fracking in county parks. County parks?!? Unbelievable. 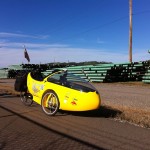 Finally had to hit the road and swung by REI right off the bike path to pick up some freeze dried meals before heading east towards McKeesport. When I rode through three years ago, cyclists had to hug the shoulder of the road for about 15 miles to get to McKeesport. Now, the bike path starts in Pittsburgh, meaning you’re effectively on the Great Allegheny Passage once you cross the river out of the city. Passed a huge pipeyard (pictured here) near the town of Duquesne, no doubt being used to supply Pennsylvania’s natural gas fracking boom. 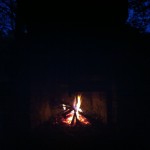 Arrived at the Cedar Creek campground right at dusk and was happy to find the lean-to cabin I used in 2010 unoccupied. So got settled in, collected some firewood and built a fire (pictured here) to warm up the place. 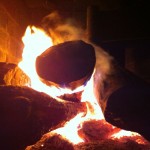 After dinner, tossed some big logs onto the flames to create a bed of coals hot enough to keep my cabin warm all night long. The roaring fire (pictured here) was beautiful.

Pedaled a modest 38 miles today, which will be about average from here on in. Not in a hurry to get to DC and have lots of preparation work to do between here and there. Must savor the experience of this final ride. 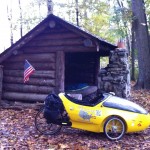 Day 9: Once the train traffic slowed down, got some good sleep and woke up the sound of falling rain and a bed of coals still warming my lean-to cabin (pictured here). By the time I packed up, the rain has stopped and the sun was starting to poke through the clouds.

Down the trail near Van Meter, paid another visit to the site of the Darr Mine disaster. Ventured into the entrance of the mine, which you can experience for yourself here: “Venturing Into Darr Mine.” 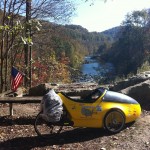 Hungry after 22 miles of pedaling on an empty stomach, found a diner serving breakfast all day in Connellsville, where I carb-loaded up. Then continued down the leaf-covered path next to my companion for the day: the Youghiogheny “Yough” River (pictured here in background). 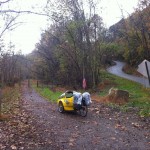 Took this shot to contrast a designated bike path that never exceeds a 1-2% grade with country roads cyclists would otherwise have to negotiate, with their endless hills and climbs and blind curves. Extremely grateful for all the work that went into building this trail.

Mid-afternoon, rolled the rocket trike across a wooden bridge towering over the gorgeous river near the little town of Ohiopyle, PA. I took this video as I crossed: “Crossing the ‘Yough’ River.” The Yough (which I learned is actually pronounced “yawk”) makes a spectacular hairpin curve around the small town, creating Ohiopyle Falls. The “Loop” provides local kayakers with some of the best whitewater paddling in the eastern U.S. Holed up in a guesthouse for the night, after 38 more miles pedaled on the day.

Day 10: Woke up to a cold drizzling rain outside with snow possible tonight, so decided to hunker down in Ohiopyle to make preparations for DC. Got out midday to explore the town by foot (which didn’t take long), but mostly sat in front of a computer catching up on the backlog of emails and phone calls. The weather forecast looks like more of the same tomorrow.