Rained through the night. Woke up again this morning to the sound of raindrops on the fly, but once again, it stopped as I started to stir, making for an effortless pack-up. Couldn’t have asked for better cooperation from the weather on this journey. 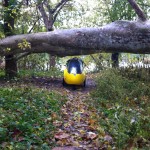 Removing the fly from the tent, discovered a host of spiders and other critters that had taken up residence on the tent’s surface overnight. Seeing them all was truly a National Geographic moment. Rolled under this downed tree (pictured here) on the way out of camp in the morning. 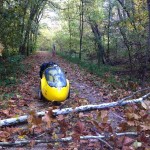 The wind from last night’s storm brought down some branches (pictured here), which I had to carry the trike over. Fortunately, no large downed trees blocked the path.

Grabbed some lunch, recharged the laptop and re-supplied at White’s Ferry Grille for the final stretch. The owner hooked me up with a generous discount to accommodate the dwindling bills in my wallet. Really appreciate it, Mike!

Then took the Historic White’s Ferry across the river. Not that I needed to get to the other side (I didn’t), but it’s not everyday you get this kind of transport, so had to experience it in the rocket trike. Here’s a short video I took: “Rocket Trike Ferrying Across Potomac.” 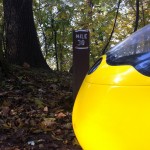 Mid-afternoon, I declared the ride over after 485 miles of pedaling, despite still being 30 miles from the White House and decided to call the White House to ask them to meet me on the C&O Canal Towpath to pick up the petition at mile marker 30 (pictured here). In the hopes that President Obama might come out to pick it up himself, I’m offering the president a wager. He can pick any bike he wants and I will pedal the rocket trike over the muddy, rutted towpath trail in a 30-mile race to the White House. If the president wins, I will call off our Nov. 7 event outside the White House. If I win, President Obama will “direct his administration to cut through the red tape, break through the bureaucratic hurdles, and make stopping the southern leg of the Keystone pipeline a priority, to go ahead and get it done.” I’m willing to make a wager of this nature on something so serious for the simple reason that I know I would win — because I’m riding for more than he is. See the challenge for yourself here: “Ride Declared Over 30 Miles Short of Goal, President Obama Challenged to Bike Race.”

OK, I’m just kidding. I’m pedaling the last 30 miles of the journey. I’m not going to ask the White House to come out and pick up the petition, and I certainly don’t expect President Obama to hop on a bike and race me to the White House. But I’m not kidding about who would win.

To mark the 485th mile, I want to extend my heartfelt thanks to the more than 7,000 people who have taken such a principled stand in signing the petition to stop the construction of Keystone XL’s southern leg. It has been a privilege and an honor to carry the petition to the White House on your behalf. Please join us at noon on Nov. 7 outside the White House if you can. Stay tuned here for more details.

An easy 13 mile day brought me to my campsite for the night, Chisel Branch, where I decided to forego a fire and hit the hay early.