On November 7, 2013, a small but powerful group of climate justice leaders gathered in a light rain outside the White House to demand that President Obama intervene to stop the construction of Keystone XL’s 485-mile southern leg. Upon our arrival at Lafayette Square, we were told the quadrant of the park permitted for our action was suddenly being closed off. When asked why, the Park Police officer on his bike refused to say. In Orwellian fashion, he described their ability to open and close the park at will as “democracy in action.”

So we gathered under a beautiful tree on the other side of the park. Here are my opening remarks: “Weis Addresses Climate Leaders Outside White House Demanding KXL’s Southern Leg Be Stopped.” Emphasizing that everyone there was also united against Keystone’s proposed northern leg, I pointed out that while most of the national environmental groups have been focused almost exclusively on that, the southern, and most dangerous, leg of Keystone XL has gotten 95% built.

Describing the Obama administration’s cynical handling of the Keystone issue as “bait-and-switch,” I explained how the president first postponed a decision on the pipeline’s northern leg in November of 2011, only to turn around several months later and direct his administration to fast track construction of the pipeline’s southern leg. I also shared that TransCanada wants, but does not need, Keystone’s northern leg to begin pumping more than half a million barrels of toxic tar sands daily from Alberta’s mine fields to Texas port refineries by the end of this year. 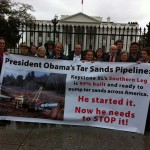 Here are some of us at the White House gate holding up a banner that gives President Obama ownership of the pipeline’s southern leg for having directed his administration to fast track its construction in 2012. The land pictured being destroyed belongs to Texas landowner Michael Bishop, who was unable to join us in Washington, DC due to a family medical emergency.

Here’s the statement Michael Bishop asked me to read in his absence: “TransCanada’s Keystone XL pipeline has destroyed my property and the future of my children and grandchildren and was approved and promoted by President Obama. This was done in spite of countless Americans and people across the world protesting the dangers of tar sands mining. When politicians put big business and corporate lobbyists ahead of public health and safety and refuse to hear the concerns of those who elected them, it is time for action. Climate change is real and I stand with scientists and many other Americans, and especially with Tom Weis, in challenging this administration to stop speaking out of both sides of their mouth and to take a stand against this pipeline being completed. The climate crisis demands that all tar sands development in Canada be stopped. This administration must wake up to the lion at our doorstep.”

I concluded with a promising update on Mike Bishop’s lawsuits to stop the southern leg, and by paying tribute to the courageous members of Tar Sands Blockade and Great Plains Tar Sands Resistance who not only put their bodies on the line, but “threw their bodies into the machine,” to stop Keystone XL’s construction.

Dr. Harvard Ayers, Chairman of Arctic Voices, spoke next about his recent visit to Fort McMurray in Alberta, Canada, where he witnessed first hand the destruction of tar sands mining and heard the stories of the Cree people and Athabasca people who live in villages downstream from where the toxic mining is occurring. He spoke about cancer clusters and other terrible diseases that have decimated First Nations communities. He described massive reservoirs filled with toxins that are leaking into the Athabasca River, which flows downstream to Fort Chippewa, poisoning the fish and other wildlife Native people hunt and fish for sustenance. He described the scale of the destruction from tar sands mining as even worse than mountaintop removal mining, which he knows all too well, living in the Appalachians. He said he has “never seen so much fraud… There’s trillions of dollars involved here. Keep in mind trillions, that’s with a ‘T’. That’s how much money is involved here and this is exactly the reason it’s happening.”

Next up was Kent Lebsock with Owe Aku (“Bring Back the Way”), an organization of Lakota Sioux people whose territory and sacred water is threatened by Keystone XL’s proposed northern leg (before the event, Kent conducted a Native ceremony in Lafayette Park to bless our gathering). Kent expressed some strategic differences of opinion over emphasizing the southern, versus northern, leg of the pipeline, along with his belief that petitions, legislation and lawsuits don’t work if they aren’t what the government wants. He urged nonviolent direct action by everyone who is serious about stopping Keystone XL, while also emphasizing that Owe Aku allies with many kinds of people using many kinds of strategies, saying people ultimately need to follow their own hearts. (Owe Aku is currently conducting nonviolent direct action training through a program called “Moccasins on the Ground” to prepare people to put their bodies on the line if TransCanada attempts to come through Lakota territory.).

You can watch some of our give and take here: “Owe Aku’s Kent Lebsock & Tom Weis Talk Stopping KXL at the White House.” Kent made the point that it’s not event size that matters, reminding everyone that tens of thousands of people across the continent are united with us in their opposition to Keystone XL and other extreme methods of fossil fuel exploitation. Welcoming the airing of strategic differences, I restated my commitment (as someone who participated in “Moccasins on the Ground”) to preventing the tar sands pipeline from crossing Lakota territory. I also reiterated my view that stopping the pipeline that’s being built right now needs to be priority #1.

Talking about the Cowboy & Indian Alliance that has been formed to stop Keystone, Kent said to knowing laughter, “The joke in Indian Country today amongst Red Nations people is you all are the new Indians. They’ve been taking our land for hundreds of years, so welcome to the reservation.” Emphasizing that stopping Keystone XL, or even tar sands development, is not enough, and that we need to transition off of fossil fuels as quickly as possible, I closed by saying if the Obama administration could conjure up a way to start the pipeline’s construction, they can surely conjure up a way to stop it.

As we prepared for the petition delivery, I shared my plans to occupy the White House sidewalk to bear witness to this gross injustice: “White House Less Eager to Arrest Activist This Time.” My intention was to bear witness until we had a change in the heart of the man occupying the White House or until I was hauled away by security officials. Neither happened. 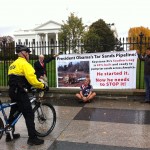 Following this, we moved to the sidewalk in front of the White House, where two climate champions, Dan Choi and Harvard Ayers, volunteered to hold up our banner while I sat down on the sidewalk. It wasn’t long before a Park Police officer confronted all three of us (pictured here), sternly warning that we would be arrested if we didn’t move. By now, a NBC News cameraman was on the scene filming the action. Harvard and Dan slowly moved with the banner, while I held my ground on the sidewalk. This went on for quite some time.

Dan eventually walked over to security officials to tell them I had no intention of moving. They told him they did not want to arrest me. It’s no secret that White House officials typically go to great lengths not to arrest protesters to avoid media coverage critical of the president, and security officials were acutely aware of NBC’s live video feed taking place. I also had a demonstration permit, to legally protect others involved in our action. 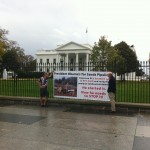 Harvard and I then proceeded to stand in place, holding the banner up against the White House fence (pictured here), with the NBC cameraman still filming. This, too, went on for quite some time, with no reaction from security. Feeling like we could do this forever, we eventually left, but not before I spoke with a friendly Secret Service agent who told me he remembered loading me into the paddy wagon on day one of the 2012 Keystone XL action outside the White House when 1,253 people were arrested (that time, I spent two nights in jail as part of the Obama administration’s failed attempt to intimidate future waves of KXL protesters). The agent offered to ask Park Police about the possibility of doing a “staged arrest,” but that not feeling authentic, I demurred. I want to extend a special thanks to Ann Wilcox for being our legal observer on the scene.

I am extremely grateful to everyone who signed our petition – and especially to those who participated in this historic event – for demanding that Keystone XL be stopped IN ITS ENTIRETY. By speaking truth to power, you have helped invigorate the fight to stop Keystone XL’s southern leg. Coinciding with our action, and in the days immediately following, organizations and leaders that have been sitting on the sidelines have finally begun speaking out in support of Mike’s lawsuits, any one of which could stop this tar sands monster in its tracks. As the great humanitarian Margaret Mead so famously said, “Never doubt that a small group of thoughtful, committed citizens can change the world. Indeed, it is the only thing that ever has.”