Pedaled about 8 miles up the trail this morning to the Eastern Continental Divide, which divides the Gulf of Mexico and Chesapeake Bay watersheds. 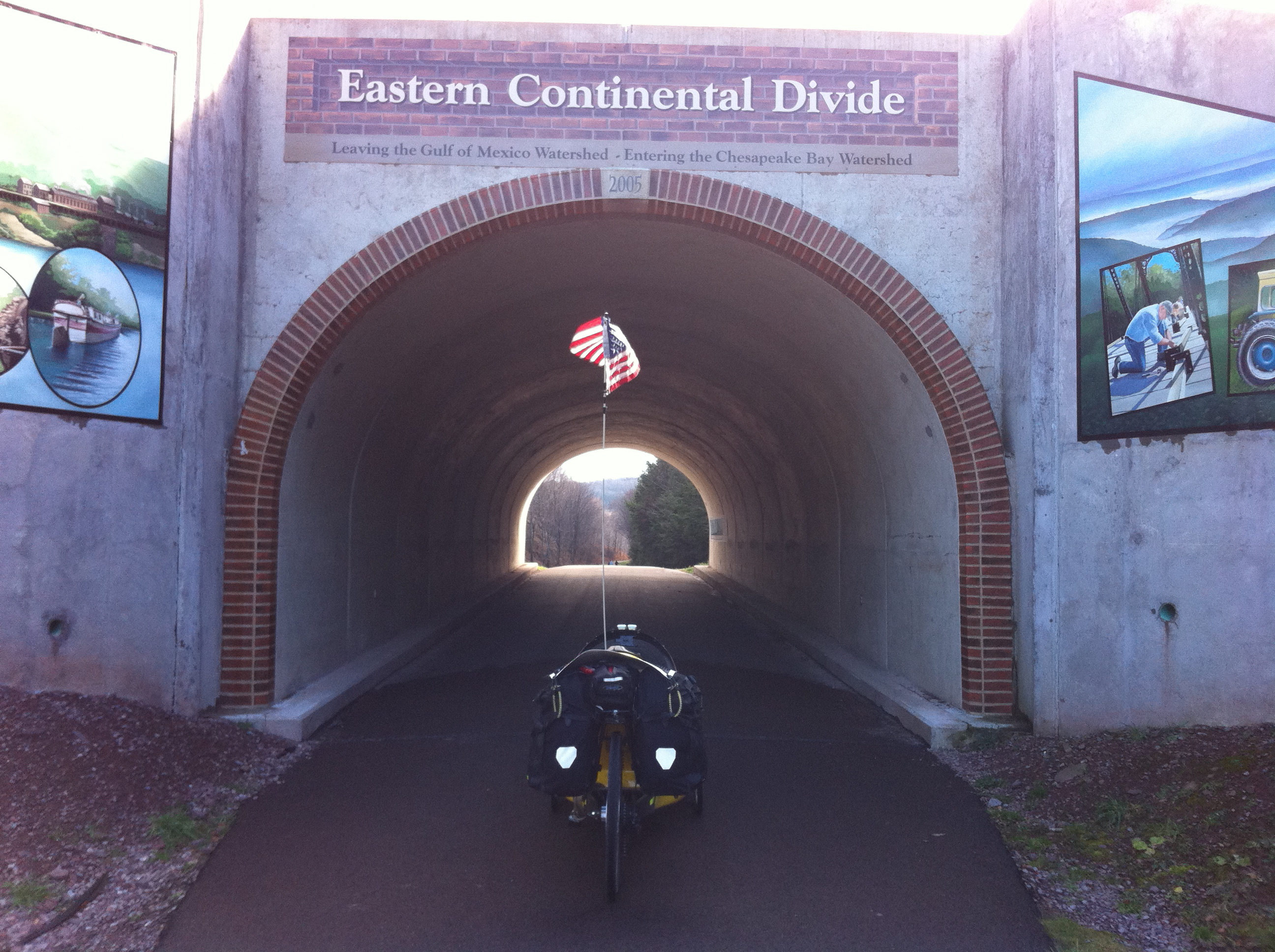 A couple miles later, was relieved to see the doors to the Big Savage Tunnel still open after the ice storm. Rode through the 3,100’ tunnel with no lights to get the full effect. Had to have a little fun with the video.

Shortly after coming out the other side of the tunnel, I crossed the Mason Dixon line and it was literally all downhill to Cumberland, MD. Really enjoyed being able to coast downhill for miles the first time this trip. 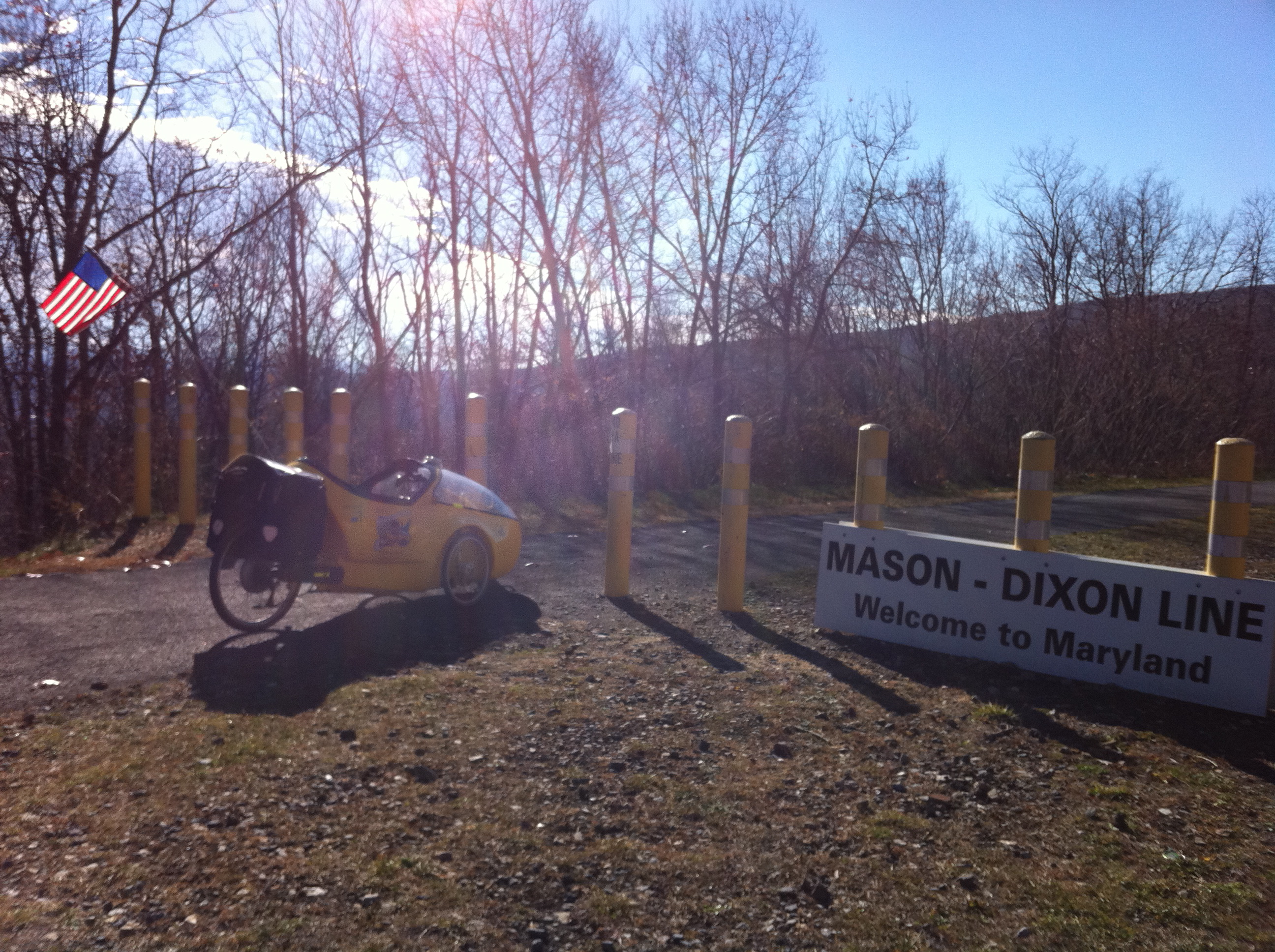 Awhile later, ran into Cumberland-based Adventure Cycling Association guide, Larry Brock, and rode with him into town. Was good to have some company for a change. Pedaled through the Brush tunnel (this one actually shared by trains), built in 1911.

Then Larry turned me onto the Cumberland Bone Cave, an ancient cave with fossilized bones from over 200,000 years ago. Skeletons discovered in the cave include those of the “Cumberland” Cave Bear, a Saber-toothed cat, even a crocodile.

Asked Larry’s advice on whether the trike had the clearance to make it down the C&O Canal bike path (had been getting conflicting views on this) and he wasn’t sure, so he took me to the C&O Canal Visitor Center. They were equally unsure, but said I would know within two miles when I hit the first gate. Good enough for me.

Said goodbye to Larry and rolled up to the Cumberland Times-News for a quick interview and shot of the trike. As Ken was conducting the interview on the sidewalk, a car accident unfolded in front of us on the street. No one was hurt, but I watched the front bumper of the rear car explode upon impact, little pieces flying through the air. Then I turned to my left and watched a large man attempt to jump onto a moving steam train that was backing into the station, and almost fall under its wheels. Two accidents in as many minutes was enough for me. For the newspaper shot, decided to walk the trike down the sidewalk to a side road with very little traffic. No sooner did I get in than a car came barreling toward me, pulling to a stop a little too close for my personal comfort. A panicked-looking young woman on her cell phone jumped out and ran past me to the scene of the accident, without giving me a second’s notice. Thanks, Ken, for yelling at her to slow down. Very happy to be taking bike trails the rest of the way into DC.

With 40 miles on the day, rolled down the street to the YMCA, where I pitched my tent ($10/night) and went inside for a sauna. Then walked down the road to a local bar for dinner and a few cold beers (thanks, Brian!). Walking back down the dark, deserted road to where my tent was pitched, talking to my friend Paul on the phone, I was surprised to see the tarp I’d placed over my trike was on the ground, and my tent gone. Upon closer examination, found the tent sitting upright about 40 feet across the lawn. The swirling wind had blown the staked tent end over end across the lawn and blew the tarp off. Could have made for a very cold night, and long walk to Washington, DC!