Slept under a beautiful Cottonwood tree and woke up feeling more refreshed than I’ve felt the whole trip. The campsite was so peaceful, I decided to take the morning off and take my time getting out of there. Visited the Prairie Dog colony on my way out of the park, but was surprised by its size. It was smaller than most prairie dog colonies scattered throughout Boulder. 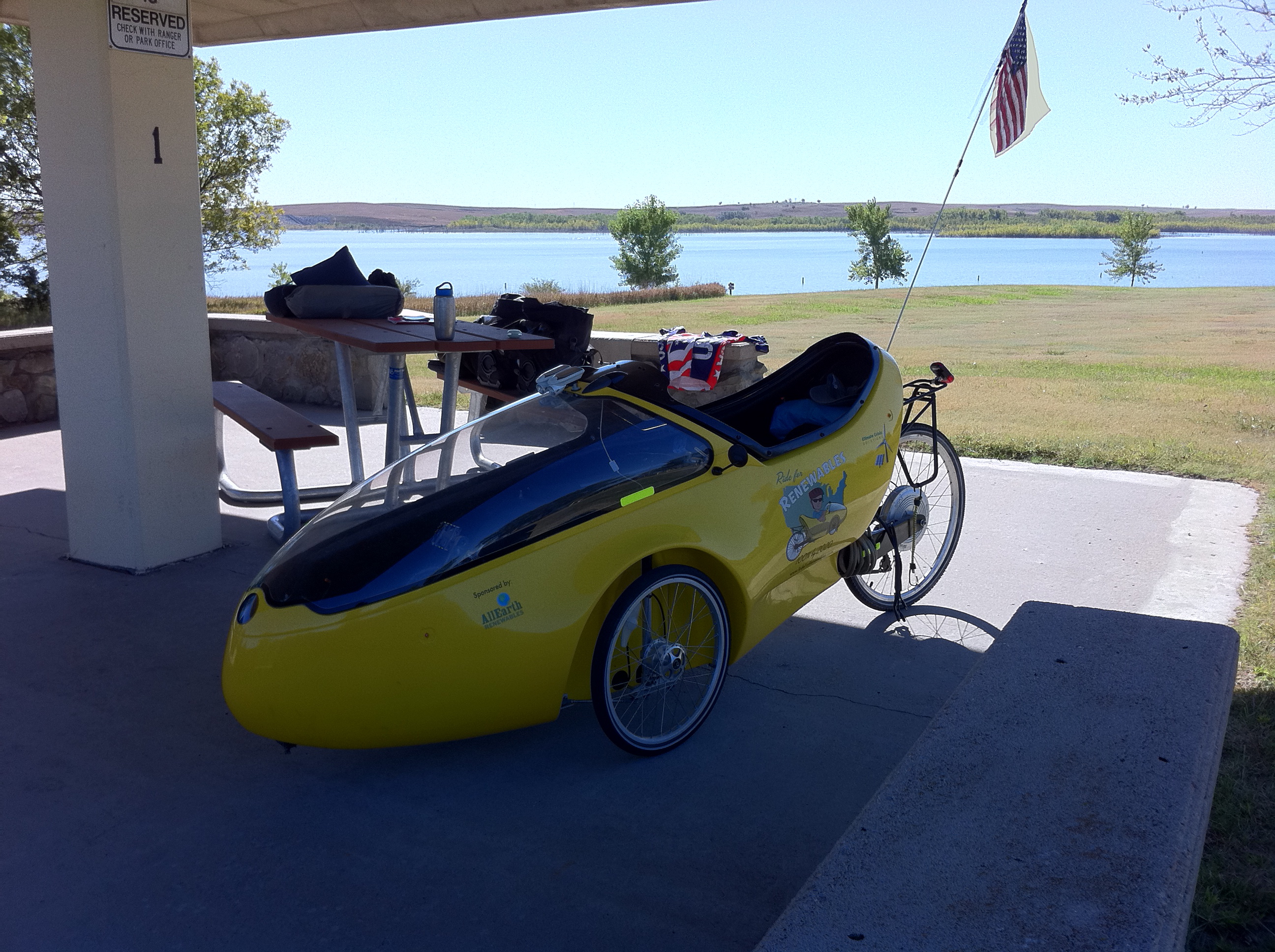 Finally hit the road a about a quarter till noon, rolling into Norton 30 minutes later. Grabbed some lunch at a local diner and stopped by the Norton Telegraph for an interview and shot of the trike.

Later rolled down Main Street in Prairie View, and then Stuttgart, on my way to Phillipsburg, where the Advocate took a shot of the trike and did a quick interview.

Met my first fellow recumbent bike rider today, as I was leaving Phillipsburg. Told me he was a bear hunter and kept in shape for hunting season by riding (he finds the recumbent more comfortable than a regular bike). When I told him my route east, he suggested a more bike friendly route, which worked out well, so thanks, Bill!

On this trip, I have pedaled by more cows interested in my yellow rocket trike than you can shake a stick at. I really think cows have gotten a bad rap, because you can’t be both curious and dumb. More often than not, the cows I come upon stop what they’re doing, look at me, and continue watching me long after I’ve passed. Same with most horses I’ve come across on this trek (some have even eagerly run up to the fence for a closer look). I guess they’re just bored with cars and trucks (having seen so many of them over the years) and are trying to figure out what this yellow, futuristic-looking thing riding past them is. I’ve even had cows and bulls as far as hundreds of yards away look up and check out the trike. It’s really quite something and happens all the time.

Rolled down the main streets of Agra and Kensington on my way to Smith Center, where I again arrived just as the sun had set and it was starting to get dark. On the way, had two cars pull over ahead of me to get photos of the trike. The driver of the second, Judy, was kind enough to tell me where I could camp for free in town, which is where I’m writing this now, snuggled into my cozy tent. More hawk sightings today. Logged 72 miles, for a total of 500 miles ridden so far (about 20% of the way there).