The bitter cold limited my riding days in DC, but on the days I managed to get out, I usually made for the National Mall, ready made for bikes, where the excited reactions from tourists to seeing the trike never seemed to end. My favorite DC ride day was when Jo Reyes pedaled his hybrid electric bike down from Takoma Park to ride with me on the bike path to Old Town Alexandria and back (thanks for the lunch, Jo!). Another day, I came across these residential-scale wind turbines on display at the U.S. Botanic Garden, which I later learned were indeed generating electricity for the building:

Strange as it might sound, one of the most enjoyable activities during my stay in DC was the annual Polar Bear Plunge, sponsored by the Chesapeake Climate Action Network. Along with Sierra Club board member Jim Dougherty, my friend, Charlie Garlow (dressed as a wind turbine), and about 200 other intrepid souls, I plunged into the icy waters of the Potomac River at National Harbor on one of the coldest days of winter. At 22 degrees, the air outside was even colder than the water, which had ice on the shoreline and slush at water’s edge. 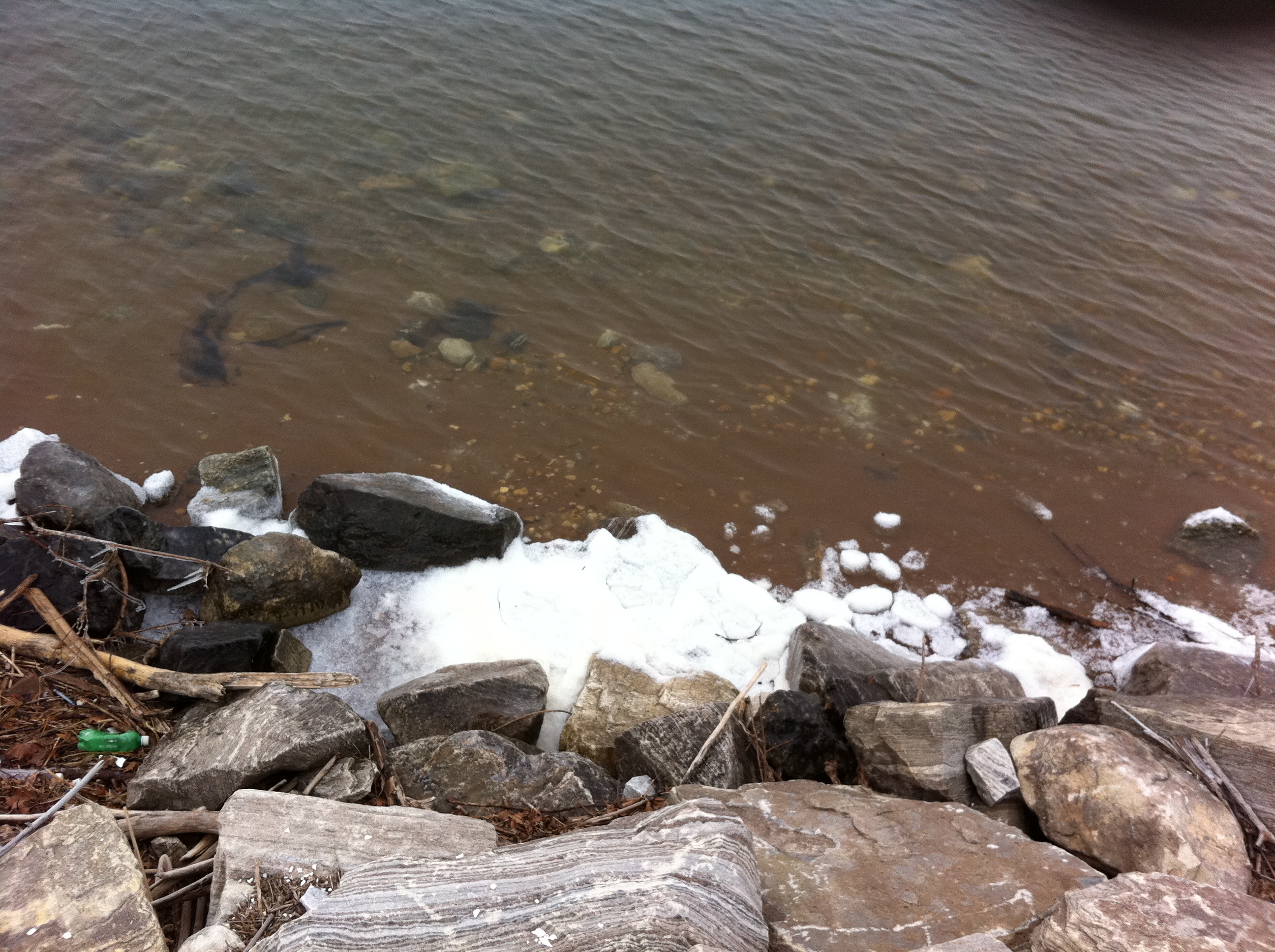 The speech by Congresswoman Donna Edwards (D-MD) imploring us to protect future generations from the ravages of a heating globe was inspiring enough, but then she outdid herself by plunging into the river with the rest of us. That’s what I call political leadership! She was joined at the event by San Francisco 49ers linebacker NaVorro Bowman, who expressed interested in my ride and support for its goal.

After the speeches, we hurried over to the changing tents to don our swimsuits, then made our way down to the shore. As I waded into the river, I just kept repeating to myself: “This is not a problem. This is not a problem…” before finally diving underwater to fully experience the big chill. After swimming around for a few seconds, with EMTs in waterproof gear hovering nearby (in case of heart attacks or hypothermia, I presume), I began wading back to shore. Still in the water was an elderly woman in a one-piece bathing suit, leaning on a cane, slowly making her way over the rocks. At that moment, I didn’t feel so tough. I gave her a hand, then a big hug of admiration. That is the spirit that’s going to help us turn the tide on the global climate crisis here in America.

There’s probably no tougher media nut to crack than the Washington, DC media market, but you just have to keep at it. My friend and fellow electric vehicle advocate, Charlie Garlow (http://www.evadc.org/about_us.html), had tipped me off to a reporter at ABC News who was new on the environmental beat and was looking for green tech stories. So I pitched him on the ride and he was able to convince his editor to let him cover the story. We spent about an hour together filming, with the story running on the evening of the State of the Union address. You can watch the 2-minute clip here:

With the help of my friend Jon Stout in Boulder, I also connected with the producer of the Thom Hartmann television show, which resulted in this great 6-minute piece. You can watch it here (the interview begins at 37:05 into the show):

OBAMA SPEAKS OUR LANGUAGE IN STATE OF THE UNION ADDRESS

On the day of Obama’s State of the Union (SOTU) address, I spent the afternoon and early evening circling the Capitol until the hordes of security made it impossible to maneuver. Hand-made signs affixed to the back of the the trike read: “Congress: Renew America with Renewable Energy!!” and “Congress: Coal-Fired or Future-Generation Inspired??”

Our message is clearly getting through to the White House, as evidenced by the President’s remarks during his SOTU address. I’m not suggesting the “Ride for Renewables” was the only inspiration for the President’s “Sputnik moment” speech, but check out how closely these passages from his speech line up with central themes of the “Ride for Renewables,” broadcast widely through the media, and on the internet, in the months prior to his talk:

The good news is the White House is finally listening to Main Street, America. The bad news is the President did not mention the global climate crisis once in his speech, despite 2010 being tied as the hottest year on record. Ignoring this gravest of threats to America will not magically make it go away. Every leading national scientific academy in the world has concluded that human activity is changing the climate.

Worse yet, he intentionally muddied the waters between dirty energy sources and truly clean energy sources like solar, wind and geothermal by trying to redefine mythical “clean coal,” radioactive nuclear power and polluting natural gas as “clean energy.” The American people have come to expect this kind of subterfuge from polluters afraid of progress, but it should not be emanating from the White House. This is shameless government greenwash and must not stand. We will know the President is serious about meeting the expectations of our children to protect their futures when he declares a global climate emergency and places it at the top of his policy agenda.

In addition to a series of individual strategy sessions with Lester Brown, Brock Evans and Brent Blackwelder, I gave a number of public talks while in DC, including a lunch presentation to Lester Brown and his staff at Earth Policy Institute (thanks, Les); a lunch presentation at the Woman’s National Democratic Club (thanks, Alice); an evening reception at The Green Commuter bike shop in Takoma Park (thanks, Charlie & Jo), the annual meeting of the DC Electric Vehicle Association (thanks again, Charlie); a lunch gathering with one of my ride sponsors, Cooper Roark (a star – he raised nearly $2000 for my ride), and some of his classmates at St. Albans Academy; and a well-received community gathering at the Brookmont community church (thanks, Jody).

I want to thank again Alice & Lincoln Day, who generously provided a cozy apartment for me to base out of during my first month in DC. Providence does provide. I also want to extend a special thanks to my friend, Christin Engelhardt, for tolerating me as a houseguest during my final three weeks in Washington. Christin and I first met in 1987 working on Paul Simon’s Iowa presidential campaign and have been close friends ever since. Even better than all the great meals, and the laughter, was her company.

ROLLING HOME ON THE RAILS

After changing my ticket several times to extend my stay in DC, I finally boarded Amtrak’s Capitol Limited – described as an “all-American journey between America’s heartland and the nation’s capital” – for the 36-hour ride home. As fate would have it, the train’s route covered some of the same ground I had pedaled to Washington, DC. As we rolled out of DC, I could see outside my sleeper cab window, mere yards away, the very same C&O Canal bike trail I had pedaled two months ago, now covered in snow.

As the hours drifted by, a host of memories flooded in. I was reminded of an informational plaque I saw in Akron, CO describing how in 1890, “fast trains whisked passengers through Akron on the Chicago and Denver route” at speeds as high as 112.5 mph. Don’t get me wrong. Rolling home at 75 mph definitely beats pedaling as far as making time, but what happened to America? We’ve gone backwards, while the Europeans and Asians are racing to the future on high-speed bullet trains. One can only hope the President really meant it when he said during the SOTU, “There’s no reason Europe or China should have the fastest trains…our goal is to give 80 percent of Americans access to high-speed rail.” 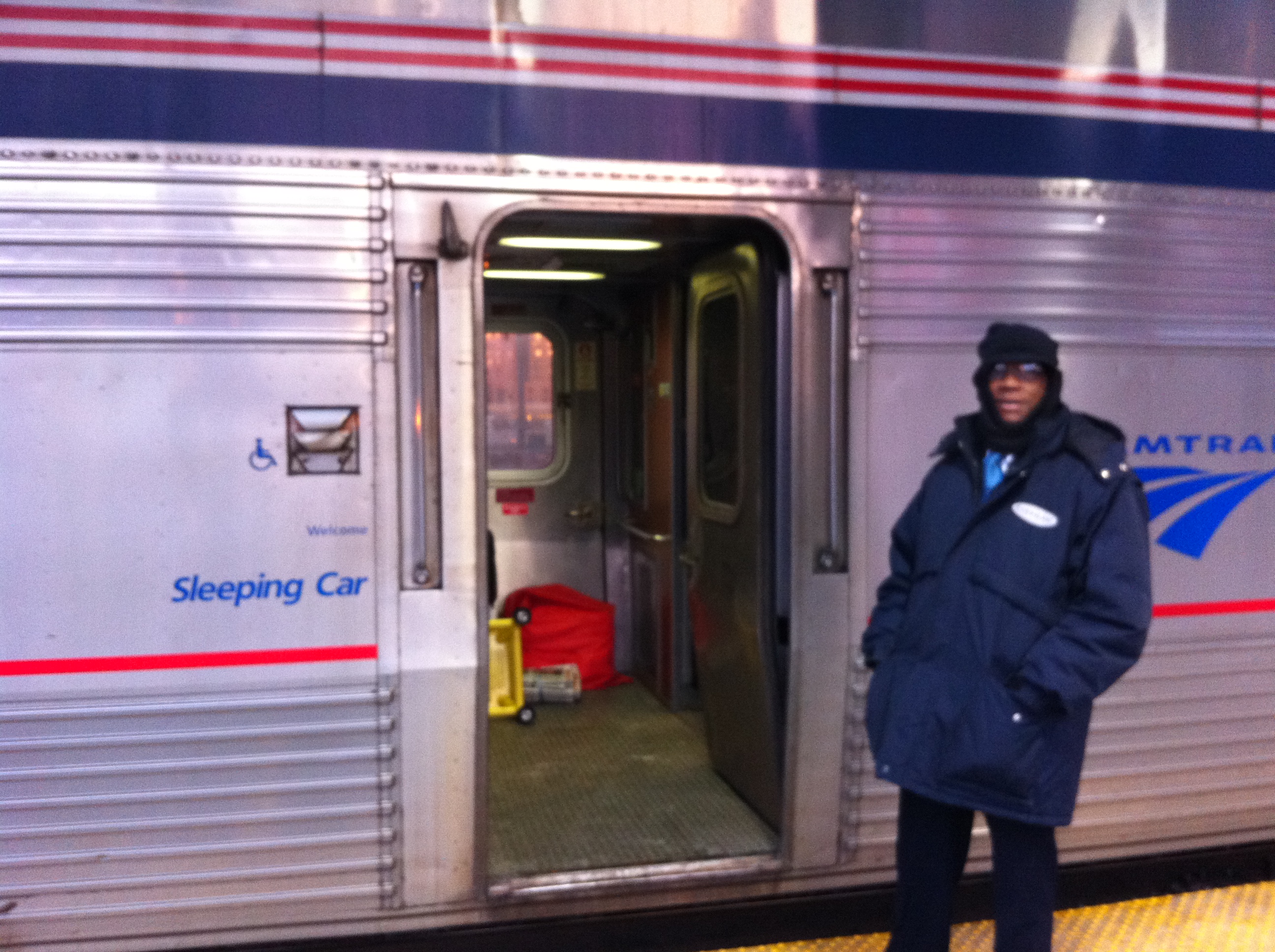 As I finished a hearty breakfast in the dining car, the train rolled into Denver’s Union Station, right on time. 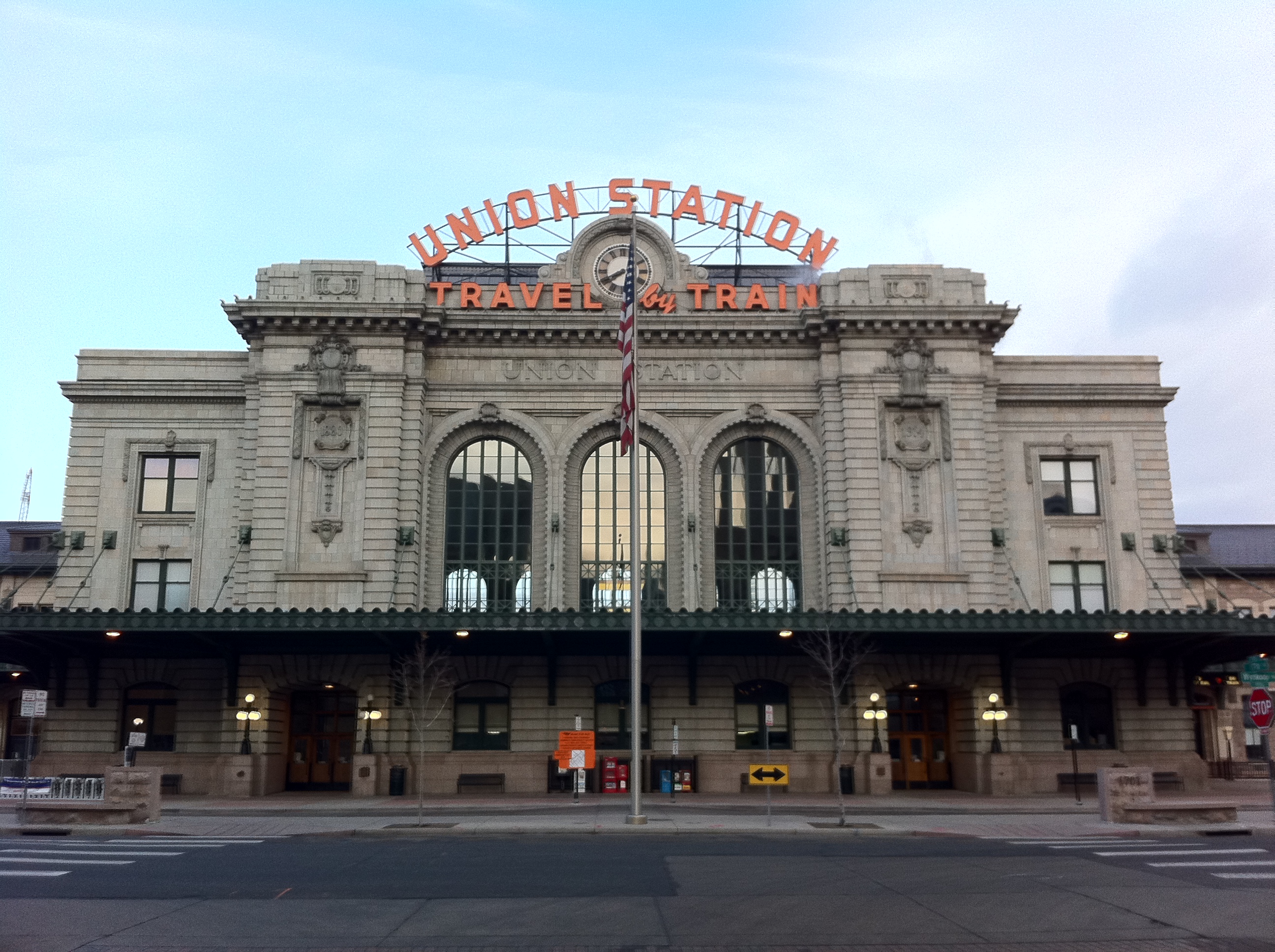 From there, I caught the bus up to Boulder. 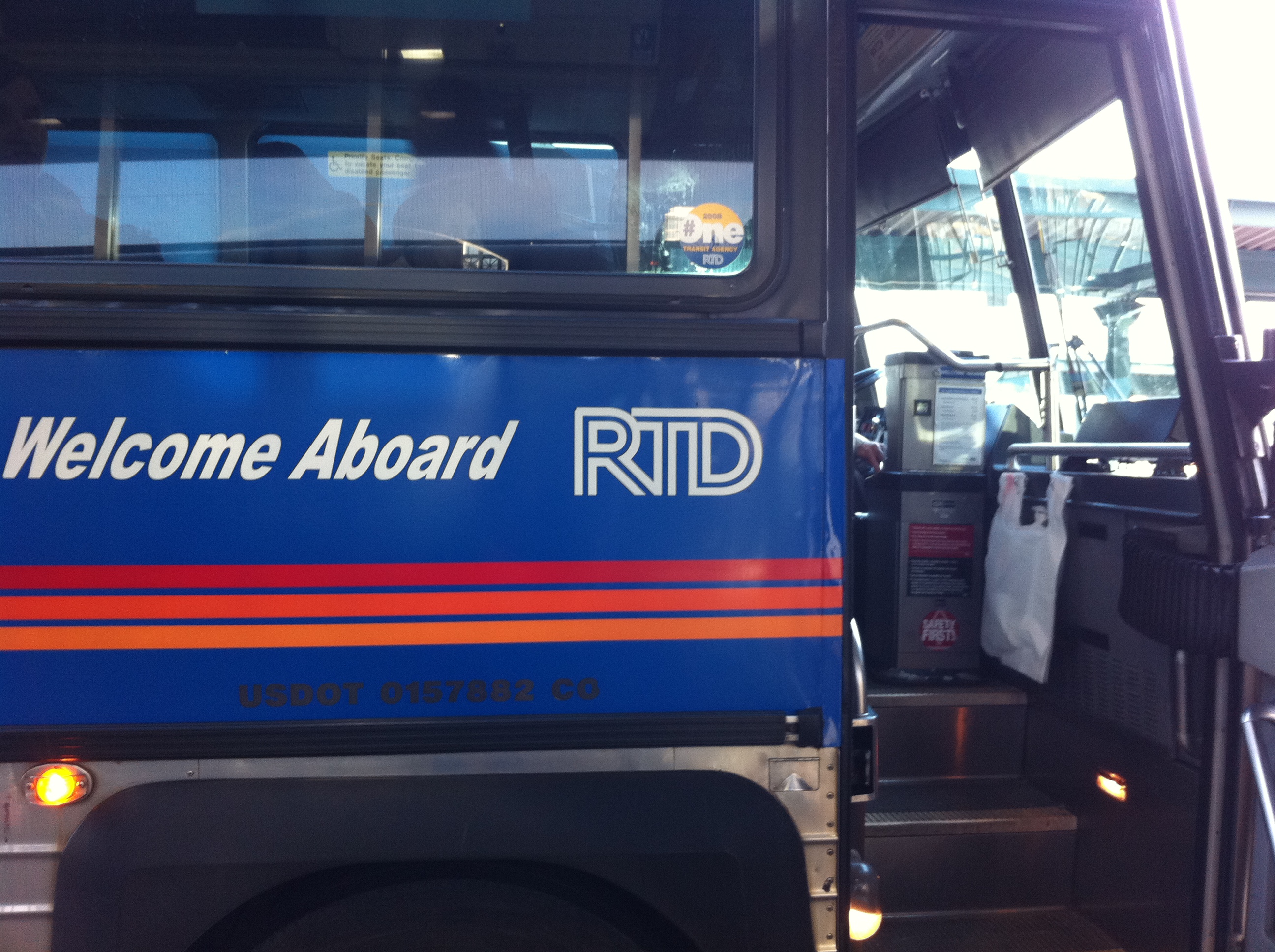 Then I walked the few blocks from the depot to my friends’ house with just a few things on my back. 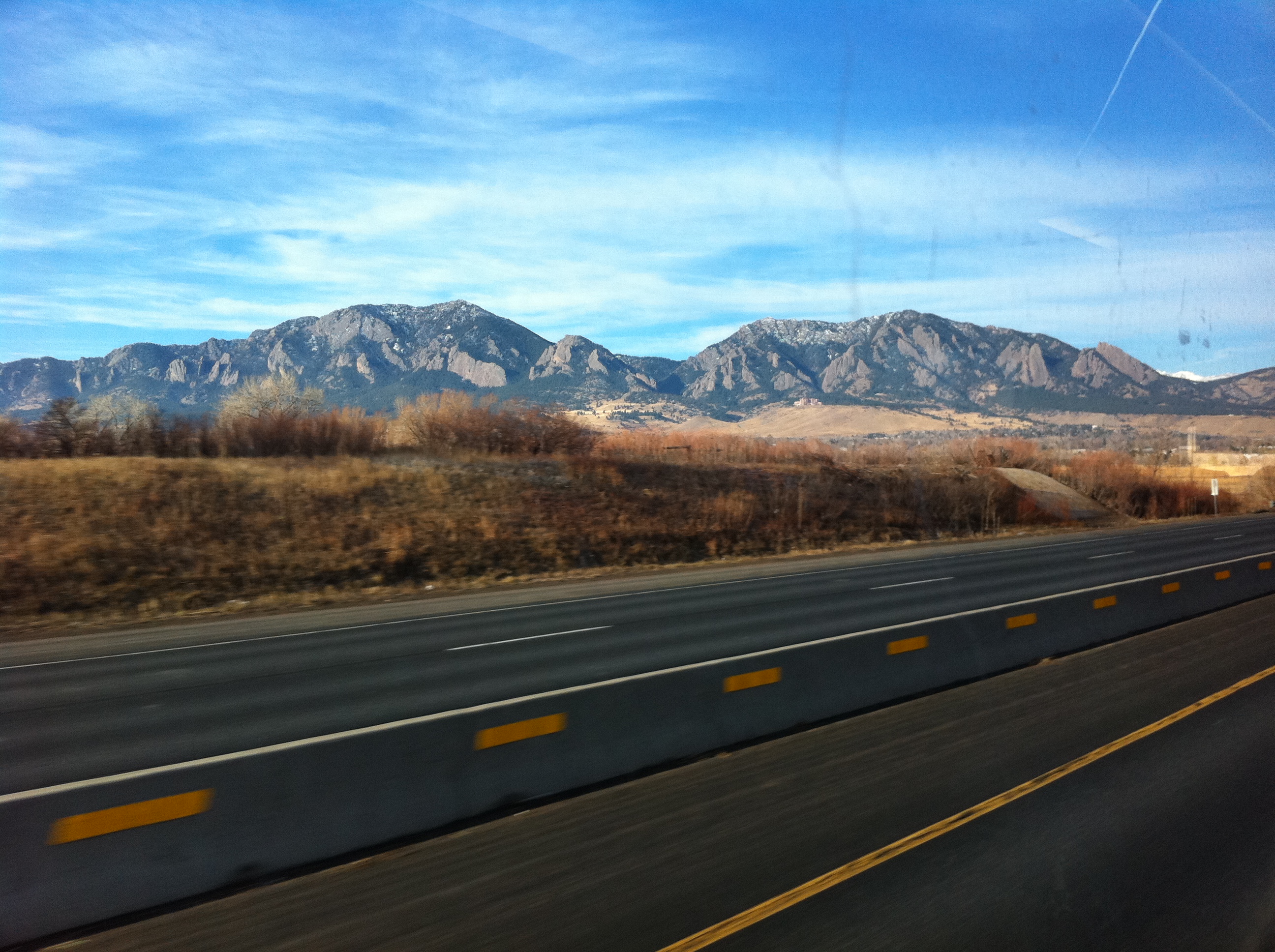 The “rocket” has landed. The sacred journey has come full circle.

When things don’t go according to plan, as has often happened during this ride, I’ve learned to just roll with it, for I know there are larger forces at work here. Made it a few miles further east in the morning, but not without extreme effort, as the bike chain kept slipping, making it next to impossible to get any leverage. It soon became apparent it was about to snap again, so I called roadside assistance for another tow, this time to a bike shop back in Newport, KY that someone had casually mentioned to me yesterday. As it would take awhile for the tow truck to get to me, I decided to gingerly pedal back to the truck stop where I had started the day. Along the way, got some great footage of the to-be nuclear turned coal power plant across the river in Moscow, OH, which I otherwise wouldn’t have gotten, but that wasn’t the half of it.

Right after pulling into the truck stop parking lot, a woman and a little boy walked over to me. Saundra Buckler said her 11 year-old nephew, Brandon, who is not easily excited, was very excited to see the trike. So I showed it to him and his family. I asked Brandon, who was wearing a Star Wars t-shirt, which was his favorite. His answer: “Darth Vader.” Loved his choice of the dark archetype who was ultimately good at heart and chose redemption in the end. I could tell little Brandon was struggling with some kind of serious disease, which Saundra proceeded to tell me about. She explained the effects of Gaucher Disease and all the close calls Brandon had already had and how he was “fighting really hard” and “doesn’t to need to be breathing all that nasty stuff in the air.” Here we have an 11 year-old child, already struggling to breathe, yet just a few miles away was a coal plant belching toxic emissions into his air. There’s something deeply wrong with this picture. Saundra asked that we not make Brandon’s fight for life any harder. Who will join me in fighting for little Brandon Buckler?

Wasn’t able to get Brandon out of my mind during the ride to the bike shop, and I don’t intend to, until we’ve secured his future.

Matt Baker’s reaction to seeing the chain told me I had problems. But the bike repair meister was on the case. After removing the seat, Matt went to work on resolving a whole host of lingering issues, including but not limited to a failing derailer, a failing (very long) chain and a failing shifter cable. A few hours later, the rocket trick was shifting beautifully and ready to roll again. Thanks Matt and Jason at Reser Bicycle Outfitters for getting me back on the road so quickly. 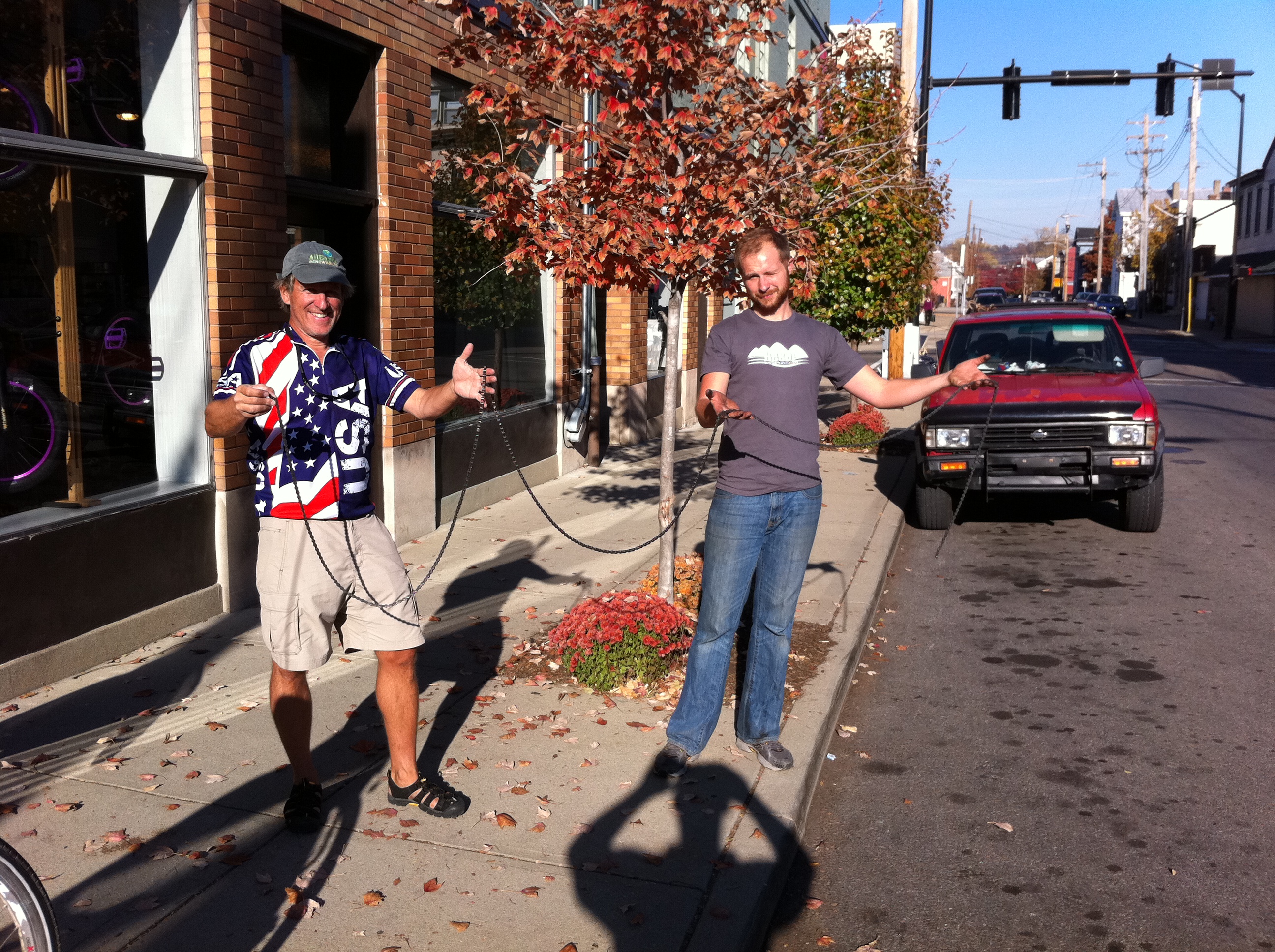 By now it was getting late, so walked down to Dixie Chile (had never tried this one) for one last Cincinnati 4-way. Had a great conversation over dinner with Stu and Nancy, both Harley riders. Then walked the trike down the street to a nearby motel. This time, it wouldn’t fit through my door, so thanks to Linda and Margie at Travelodge for letting me store it in the laundry room! Best part of staying here was the sound of horse carriages clumping down the road outside my window on the street.

Two miles forward and 30 miles back (to where I started) today. And that’s OK.