Called the Pittsburgh media outlets this morning and got a call back from The Daily News in McKeesport about 15 miles down the road, where I stopped in for an interview.

After getting breakfast in McKeesport, made my way to the Great Allegheny Passage bike trail, which runs 132 gorgeous miles through rural Pennsylvania. Very excited to be back on a bike trail with a front porch river view. No more cars for now.

Early in the day, saw lots of evidence of the lingering effect of generations of mining in the region. One stark example was the Red Waterfall, a beautiful little waterfall on the side of the trail that runs over rock stained red from acid mine drainage.

Here is a creek that runs rust red. 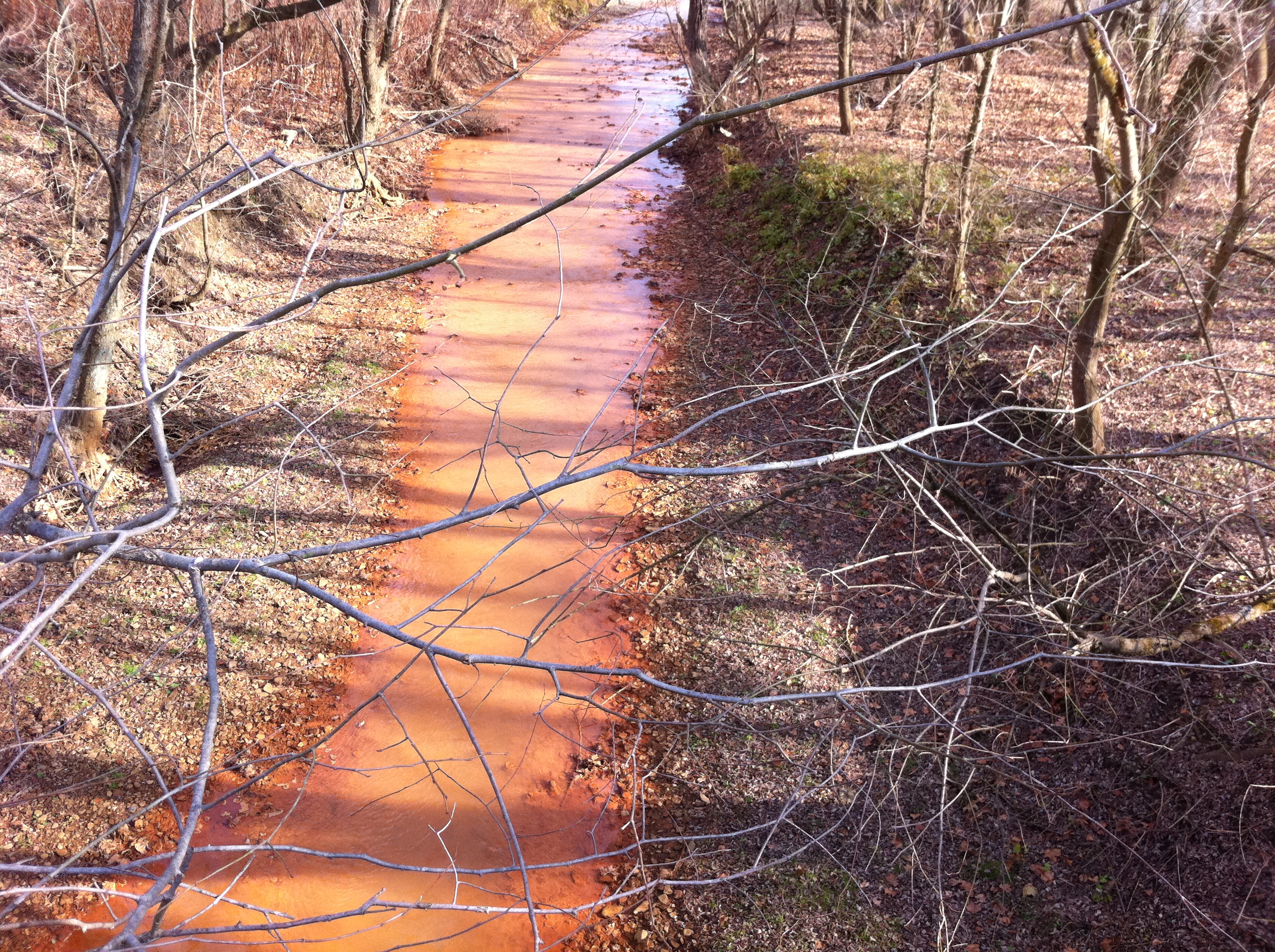 A little past the town of Van Meter, I was told to watch for a large chunk of coal on the side of the trail (looked more like black granite), commemorating one of the worst mine disasters in history. In 1907, an open flame lamp set off a massive underground explosion in the Pittsburgh Coal Company’s Darr Mine, killing 239 miners. I was told by locals that the victims included a number of children working the mine. A lightly trodden path through the woods behind the stone takes you to the mine opening, so I walked through the falling rain to honor the dead.

A United Press Dispatch reported on December 20, 1907: “Superintendent Black, who was in charge of the mine, recently resigned, as did David Wingrove, former fire boss, on account of the gaseous nature of the mine. It is said they notified the officials the mine was unsafe for the men to work in.”

In addition to learning about tragedies like the Darr mine disaster, I learned other things about the history of mining in Pennsylvania while pedaling the trail. Like how Pennsylvania coal was instrumental in producing the coke (in brick ovens still in evidence along the trail) that was needed to produce steel in Pittsburgh’s famed steel mills. This same steel helped fuel America’s industrial revolution, making Pittsburgh, and coal miners, instrumental in advancing modern civilization. So Appalachia has a proud heritage that demands respect. Few have worked harder, or under more difficult conditions, than our nation’s coal miners (coal company CEOs are another story) to keep the lights on for the rest of us. But times change. We now know that coal burning poses the single greatest threat to our continued existence on this planet. So the mining and burning of coal must end, but not at the expense of hard-working coal miners, who have earned guaranteed retraining and reemployment in the green jobs sector, if not guaranteed pensions for life.

Rode down the trail 33 miles, before coming across a campsite in Cedar Creek Park with a half-cabin overlooking the scenic Youghiogheny River that was just too perfect to pass up. 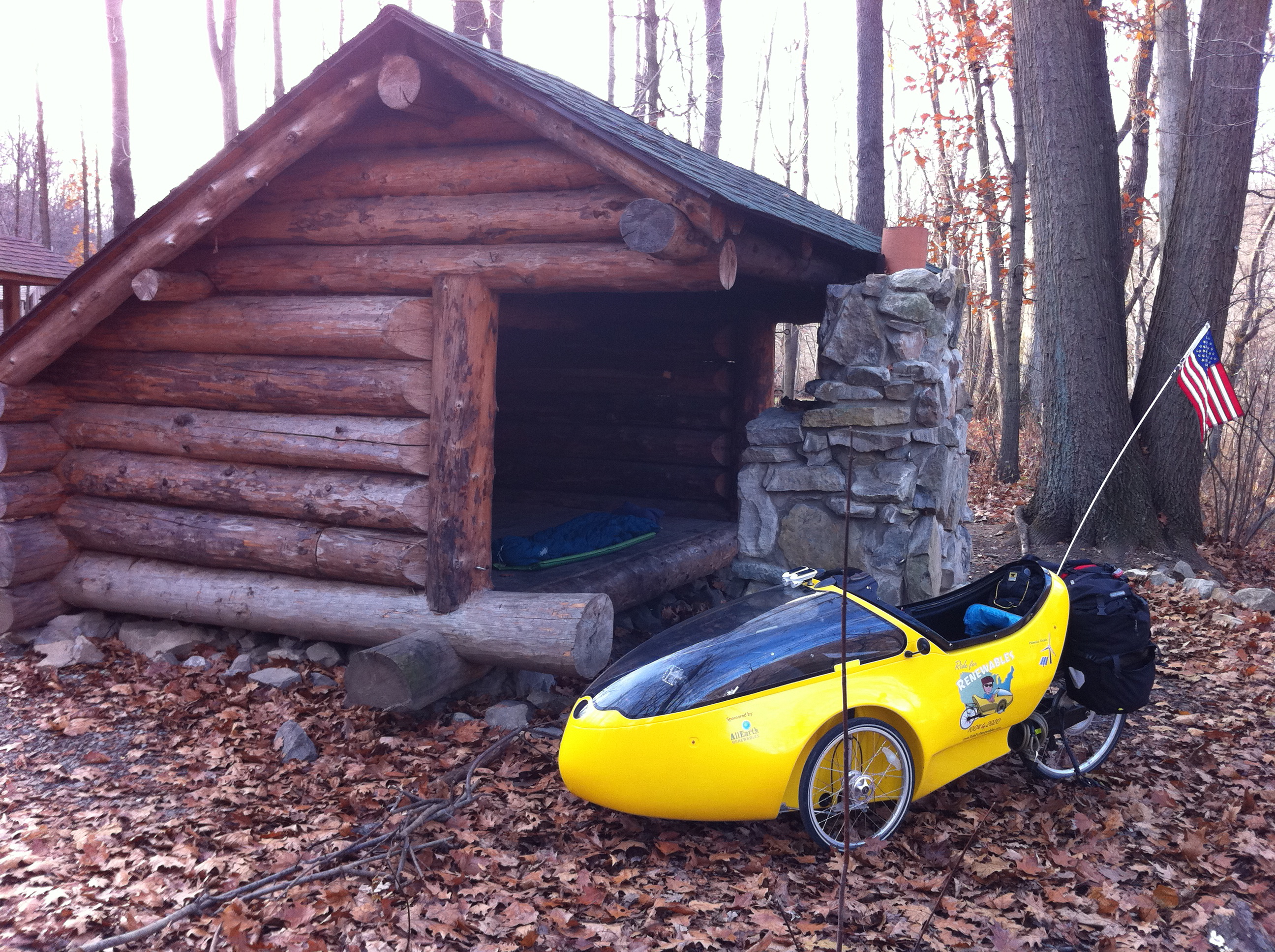 Was as good a place as any to so a little show and tell on the rocket trike.

The campsite also had a fireplace, and I haven’t had a campfire this whole trip, so tonight’s the night. 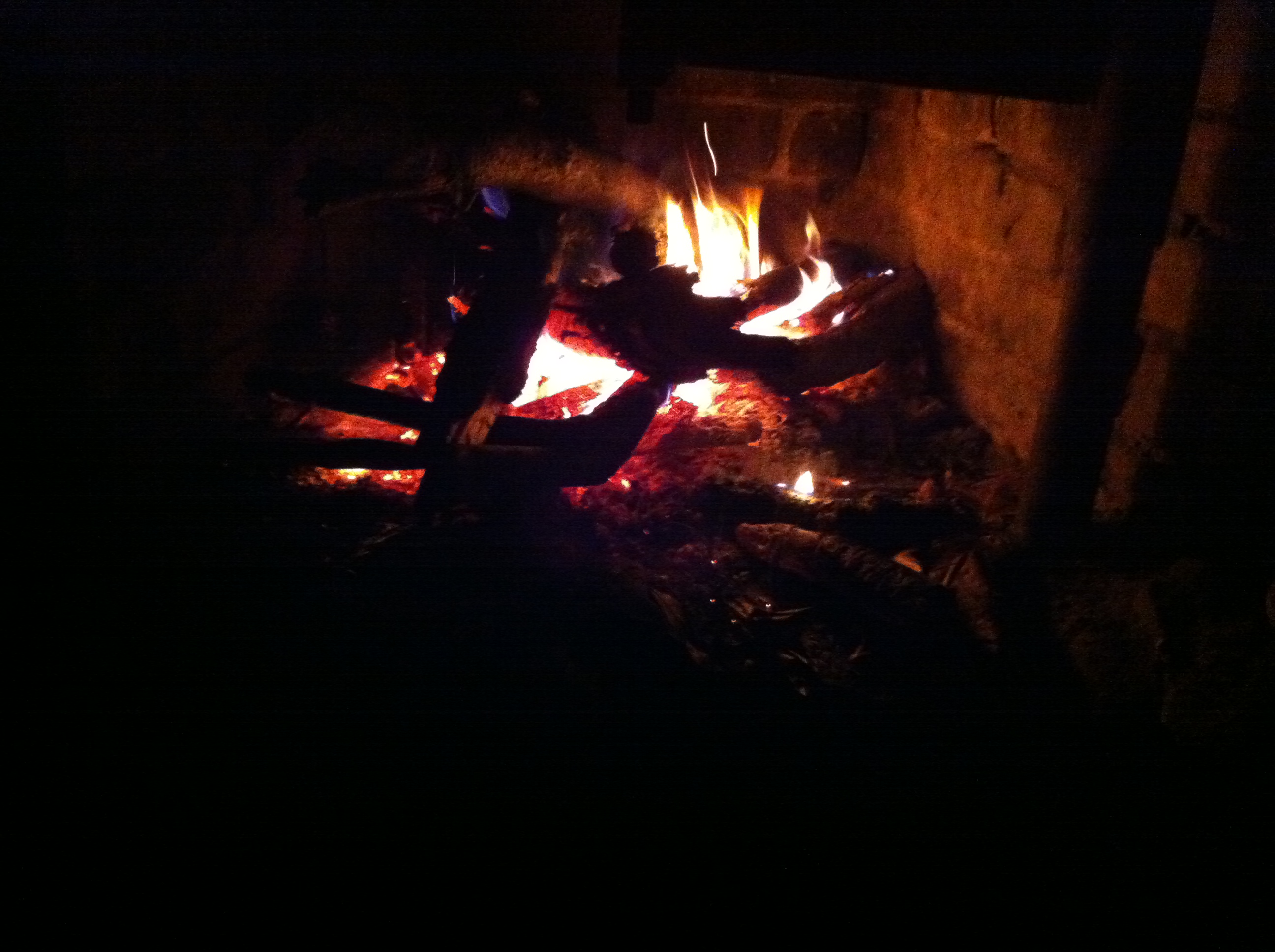 On a reflective note, today marks the 47th anniversary of one of the darkest moments in U.S. history: the assassination of President John F. Kennedy. By happenstance, I had the opportunity to visit Dealey Plaza in Dallas earlier this year. I walked up the grassy knoll, stood behind the picket fence and saw the “X” on the street marking where the president was shot. But you cannot kill a dream. President Kennedy’s bold call to land a man on the moon before the end of the decade was successfully achieved.

Another great legacy of President Kennedy is how many people he inspired, and how many continue to be inspired by his leadership today. I chose the 48th anniversary of his historic “moon shot” speech at Rice University to launch my ride because we need a modern day, green energy moon shot today to revive our economy, put unemployed Americans back to work and protect the planet for future generations.

If only we had a president today with the kind of vision embodied in President Kennedy, who famously said on September 12, 1962 at Rice University: “We choose to go to the moon. We choose to go to the moon in this decade and do the other things, not because they are easy, but because they are hard, because that goal will serve to organize and measure the best of our energies and skills, because that challenge is one that we are willing to accept, one we are unwilling to postpone, and one which we intend to win, and the others, too.”

We can choose to green our energy grid, but that would require extraordinary political leadership to rally the American people. It would also demand the rarest of traits, exhibited only by our greatest presidents: the political courage and personal strength to stand up to the powerful and wealthy special interests, in this case, the fossil fuel and nuclear lobbies. The easy choice is to keep doing things as we always have, while unemployment lingers; the economy stagnates; China claims the mantle of world economic superpower; and the climate continues to deteriorate. The hard choice, and the one that will “organize and measure the best of our energies and skills,” is for President Obama to boldly challenge the nation to renew America with renewable energy by the end of the decade.

Will end my post with this poignant June 28, 1963 quote by President Kennedy: “The problems of the world cannot possibly be solved by skeptics or cynics whose horizons are limited by the obvious realities. We need men who can dream of things that never were and ask “why not?“