Said goodbye to Marci and Joe, and pedaled out of town towards Hwy. 24. First time I had an issue with the windshield fogging up (foggy morning). Despite the early hour, decided to call Natalya Lowther, who had earlier offered me a tour of her organic farm. She answered the phone and was happy to see me, so I pedaled down the road for a quick tour of the Pinwheel Farm. How inspiring to see someone living a simple and happy life, making her living from the land in a way that respects the earth. After saying goodbye, it was back on the road towards Kansas City. Saw several hawks along the way.

Kansas City was my first major city of the trip. Spent the bulk of the day negotiating through it. Did a phone interview with CNN.com pedaling through a construction zone.

Also stopped by the Prescott Passive House, designed and built by the University of Kansas School of Architecture and Urban Planning. Their unique green project is seeking to reduce building energy consumption for heating and cooling by 90% in a way that is affordable to someone earning 80% or less of the area’s median income. Great stuff. 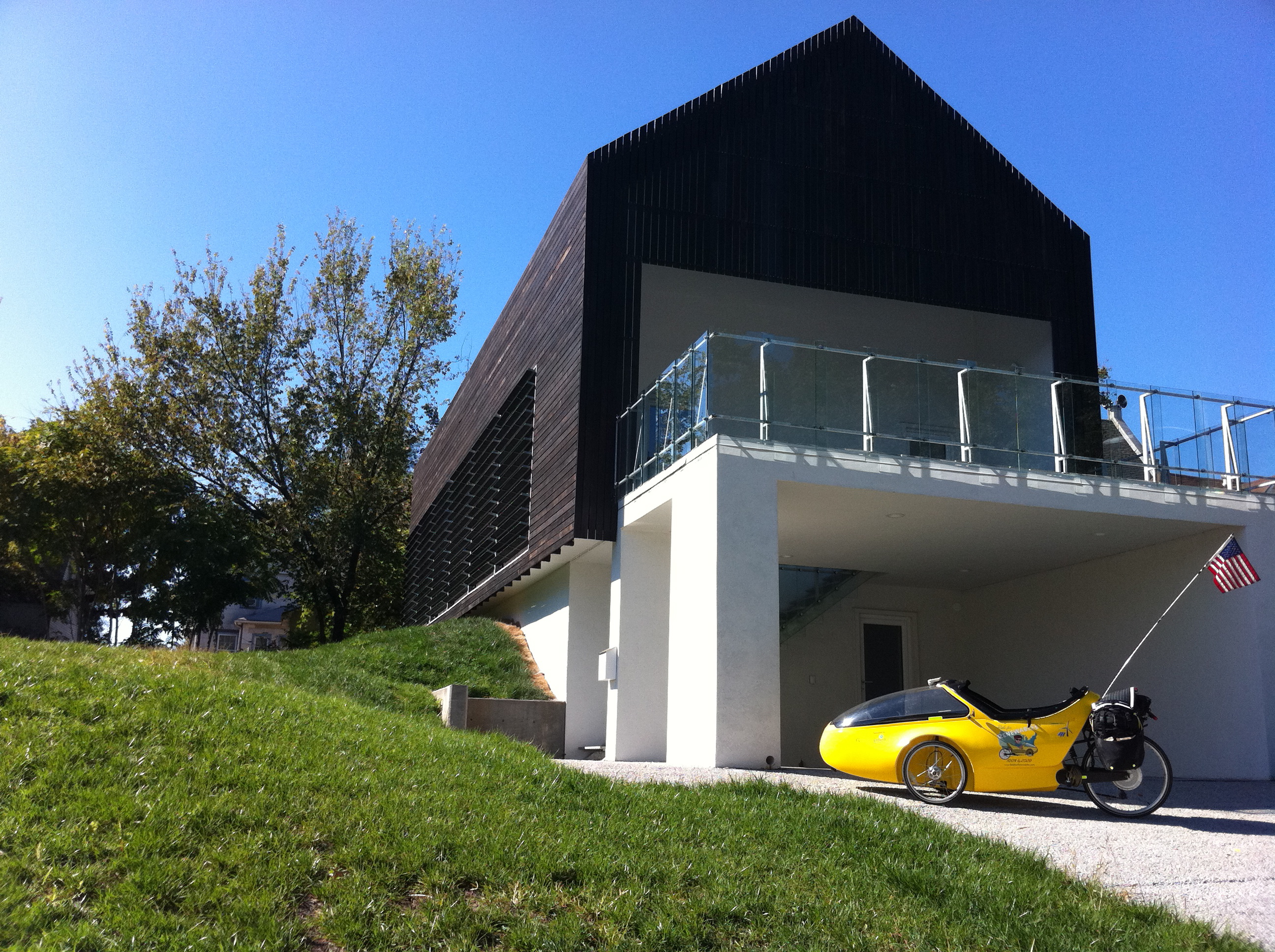 The local Fox News affiliate WDAF met me here for an interview:

Then made my way south and east through the city streets, with lots of excited shouts and whistles about the trike. I’m astounded by the level of media interest in my journey, and the rocket trike, considering I’m operating with no real media support. If I’m generating this kind of coverage on a simple cold call or visit, I can only imagine what kind of press coverage this ride would receive with a supported media outreach effort.

Was advised at the convenience store to take Highway 71 south out of the city. Bad idea. Too dangerous and too many hazards (like drainage grates) on the shoulder. Exit ramps, speeding cars, and rocket trikes do not mix. Eventually pulled off and took Prospect Avenue, which parallels the highway. Much nicer, plus I got to actually engage with people, it being a neighborhood. Lots of shouts and thumbs up on the trike. Pulled over at one point to talk to ask for directions, and a crowd gathered. What a fun interaction. Really wish I had more time to spend in the inner cities.

Eventually made it to the eastern edge of town and was aiming for a campground some miles down the road, but the sun had already set over the horizon, the road was dicey (no shoulder, with lots of hills and curves) and I was running out of light. Then I saw a large complex called Unity Village, and thinking it might be related to Unity Church in Boulder, rolled down the driveway to check it out. Turns out it’s the national headquarters for Unity Church and they had an affordable motel room, which sounded good to me right about then. What I didn’t know was the Unity Village Hotel & Conference Center is one of the first LEED (Leadership in Energy and Environmental Design) certified hotels in the country, so I’m hoping to get a tour before I leave.

Pedaled 70 miles today, although not a lot of progress east. Right knee’s acting up again and the toothache I’ve been dealing with since the first night is starting to flare up, but not a lot I can do about either. Managing pain is just part of the trip.