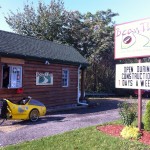 Day 5: Now I know why four different people were so adamant about me not staying at that motel. Daylight streaming in the windows betrayed it to be worse than I thought. I’ll spare you the gory details other than to say I “slept” fully clothed to avoid having to use the blanket or bedspread. I did learn something cool, though, as I was leaving. Part of the movie, The Mothman Prophesies (which I really liked), was filmed there. The paranormal film stars Richard Gere as John Klein, a reporter who stayed at this motel while investigating the Mothman legend.

After negotiating one more stretch of road with no shoulder, and a brief detour, finally arrived on the outskirts of Pittsburgh, and was soon on the Riverfront Trail, happy to be away from all the cars. Here’s a brief video showing what it was like “Rocket Triking Down Pittsburgh’s River Trail.” Along the way, I encountered something you don’t see everyday: a “Public Bra Display to Fight Breast Cancer” (the creative display is part of National Breast Cancer Awareness Month). The trail took me straight to the Convention Center for an easy 8-mile morning. After registering, found a good location inside the hall to display the trike, which drew a lot of curious attendees to find out what I was doing.

A little later, got a call from the producer of the Thom Hartmann Program to do an interview on Thom’s radio show, which you can listen to here: “Riding for Renewables.” Thom joined me in urging that Keystone XL’s southern leg be stopped, and had a very creative idea about what to do with the already buried pipeline.

That evening, David Hughes, who put me up three years ago in Pittsburgh when I did my first ride to DC, gave me a ride back to his home. After being treated to some homemade Indian food and a couple of cold beers, I collapsed into a deep slumber.

Day 6: Spent all day at the Power Shift conference enlisting attendees in our campaign to stop Keystone XL’s southern leg. Sent out a ride update to my email distribution list and got a call from an old friend from my Clean Water Action days, John Friedrich, who happened to be tabling just down the hall. It was really good to re-connect with him.

Later got a ride back to David’s home and was treated to another great meal and more cold beers. Another good day.

One Response to Days 5 & 6: Power Shift in Pittsburgh