Halloween in the Dark Woods After Birthing the Pro-Earth Movement 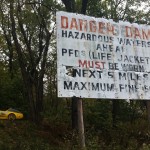 With billboards along rivers a pretty uncommon site these days, had to get a shot of this one. It’s at the headwaters of a stunningly picturesque stretch of the Potomac River a few miles upstream from historic Harpers Ferry. The river rock garden was so beautiful, I had to turn around and capture some of it on video: “Potomac Rock Garden.”

A little further down the trail, walked across the railroad bridge to Harpers Ferry to get some breakfast, recharge the laptop and get some work done. But mostly wanted to memorialize one of the more controversial public figures in our nation’s history: John Brown (the tactics he chose are not the tactics I choose, but I wasn’t alive then facing down the scourge of slavery).

Harpers Ferry is where John Brown and his Raiders led an unsuccessful raid on the federal armory that ended in his capture, conviction and death by hanging. Defiant to the very end, John Brown not only predicted the hostilities to come, but played a major role in starting the Civil War, which ended in the abolition of slavery. Here’s a video I took: “Memorializing John Brown.”

“Twenty-one men followed John Brown to Harpers Ferry. Twenty-one individuals with different backgrounds and occupations, rich, poor, black, white, some born free and others born into bondage; men with many differences joined in one common goal – to end slavery. Knowing the risks, they joined Brown’s Provisional Army and sixteen gave their lives with the hope that four million slaves would one day be free.”

Pedaling through the woods gives one lots of time for personal reflection, and as this fourth, and final, Ride for Renewables begins to wind down, I decided to share some of mine. It feels only fitting to be pedaling down a leaf covered trail as I enter the autumn season of my life. I don’t mind sharing that turning 50 was rough, particularly knowing that time is slipping away and that you probably have fewer days ahead of you than you have behind you. You also realize that you no longer have endless time to do everything you’ve dreamed of doing in this life. One thing I have decided to do with my time is to take a stand against the transnational corporate bully called TransCanada.

Today also felt like the right time to announce the Pro-Earth movement, something I’ve been thinking about for some time, and an idea I first publicly shared to a very warm reception at a gathering in support of civil rights leader Lt. Dan Choi this past spring. I believe it is time for a new social movement, one that transcends the “environmental” movement. I hope you will watch and share this video, where I talk about the Pro-Earth movement in some detail, and share some other personal reflections: “Birthing the Pro-Earth Movement While Reflecting on Life’s Seasons.”

By their very nature, large bureaucratic institutions sometimes lose their edge, stray from their mission, and start becoming part of the political system they were created to change. We are running out of time to save humanity, and the Big Green groups are simply not enough to get the job done. We need a movement that is bigger and more inclusive. So I am inviting every human being who values clean water, fresh air, healthy food and a climate that supports life to join the Pro-Earth movement. There are no dues to pay, no place to join, other than in your own heart. For those who are ready to get beyond labels like “environmentalist,” let’s work together to create a future where the human family walks down a path based on love and mutual respect. And let’s ask our Native bothers and sisters to help us find our way back to living at peace with the Earth. 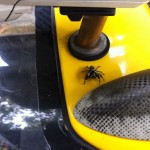 Anyone who has closely read my blogs of years past knows that hawks have been my constant companions on past rides. This journey, it’s been spiders. Orange translucent ones, miniscule brown ones, spiky ones with bright yellow backs, and too many jumping spiders to count. This afternoon, one (pictured here) dropped in on his/her web seemingly out of nowhere to visit. 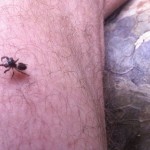 Arriving at my campsite, two more jumping spiders (one pictured here) weren’t bashful about hopping onto my leg. Not to be left out, two Daddy Long Legs (which aren’t spiders, but look like it) joined the party. A little later, while setting up my tent, another curious jumping spider appeared, which I has to shoo away to protect it from being crushed. I enjoy company, but this was getting to be a bit much.

I’ve always been a big fan of spiders and welcome them living in my home. Any creature that can singlehandedly spin a web with the tensile strength of steel has my admiration and respect. What better time than Halloween to celebrate spiders and dispel some of the fear that surrounds these fascinating beings? 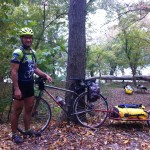 Ended an easy ride day 20 miles down the trail at the “Indian” Flats Hiker/Biker Campsite. Met Scott (pictured here), a fellow through cyclist (Pittsburgh to DC) who rolled by on his way down the trail as I was setting up camp. As you can see, there’s more than one way to lug your gear.

Enjoyed another campfire before retiring. As if to punctuate the night, an owl in a nearby tree gave out a spooky Halloween hoot as I was finishing this post in my tent.